Addition 12/12/2015 - A word on taking advice. If you want advice on an antenna system, ask someone that has the system you seeking advice about. You may not be aware of hidden agendas which could prevent impartiality.
I have had several reports that Lance W7GJ suggests LFAs have noise on them when elevated. Any such phenomena would show in modelling as well as the real world and it does not.
Several people he has quoted as having had these problems have been spoken to and the exact opposite (which is correct) has been their experience, quieter rather than more noisy.
There are many 'school boy' errors that could be made while constructing any EME array that could lead to such issues, one antenna of the 2, 4 or more antennas being reverse-wired for example.
Are you one of these people with a problem on RX when elevating? Do you know anyone that has a problem like this? If so, please contact me and I will help fix the problem you have.
Below, a 7el LFA Yagi on 6m compared to a 7el made by the company Lance promotes. Test is by a ham in Canada, not us. LFA is the quieter of the two. There are plenty of vidoes on Youtube shwoing the same results but none showing elevated noise issues.
Again, contact me if you have an issue, I will get it fixed!
UPDATE: 20:37 - 11th December 2015. Perhaps unsurprisingly, Lance was unable to share the sources that had given him their experiences as he was told in confidence. Therefore, I can confidently say this appears to be a witch hunt and the claim has no foundation, maybe it is cleverly laid out marketing ploy for his favoured brand of antennas? I am taking this with a pinch of salt: Below is what I wrote to Lance today:

These rumours extend from you and your friend in Belgium who markets the same brand as you, no one else. Perhaps you can give details of the undiscovered theory that suggests that such phenomena could occur? You won't because there is none.

Most people looking at EME are misguided into using DL6WU stacking formula (or variations of) and configurations for maximum gain to achieve their EME goals but unlike you, most live in locations where there is far more than warm earth beneath the antenna to create noise. Ironically, the result generally is a system that they can be heard on but they cannot hear as well as they would have, if receiver tuning considerations (tune for minimum noise, not maximum gain) had been applied to their antenna system, as it has been in every other part of their receiver chain.

When 4 antennas are placed in a H-frame, large side lobes occur in a forward direction beneath, above as well as to the sides of the array. Inevitably, when a ham elevates his array and there is a noise source in the far or near field, the lower lobe will move through it and cause an increase in noise which increased then decreases with the size of the lobe. This point at which this happens depends upon the distance of the noise source and the size of the array. This will occur on any Yagi and if you had a conversation with someone with such an issue, I would have hoped you would have been knowledgeable enough on the subject to have known and communicated the above.

Again, the above will occur on any Yagi, and in summary, the more gain they have configured their spacing between the antennas for, the less they will be able to hear at these elevation angles due to the increased size of these side lobes. Ironically, the increase in noise will be more pronounced on an LFA system than if using traditional Yagis that have a 'blown pattern' simply because the 'blown pattern' antennas have a far bigger rear bubble to start with so ambient noise is far higher at all elevation angles including being parallel to the ground.

I know you have moved from 2m to 6m but have you taken a look at and spoken with any of the hams using LFA on 2m EME systems including X-pols? Heard about the huge differences in performance they have seen over and above what they had before even when the previous arrays were similar or larger in size?

If the truth be known Lance, I don't think you would want to hear it would you? ''Never let the truth get in the way of a good story'' - statement I heard once relating to tabloid news reporting years ago which really did sum up what had been written in the press at that time. I was reminded of that statement again this afternoon.''

"Can Yagi-Uda style antennas as a single antenna or as part of an array produce more noise when
elevated at all?

I have been monitoring and designing lower noise Yagis for quite a while now
and did a handful of publications on this topic in Dubus magazine and on my website.
The answer is NO, they can not. It does not matter if the antenna is a low noise design or not.

Once the main and first side lobe have left 'hot earth' there is no way
additional noise could be received or generated. Analysing Antenna Temperature and G/T over elevation angles
from 0 to 90 degrees with TANT software might not resemble real world settings
for all occasions or environments, but it is a good indicator. Antenna Temperature goes down
as the elevation angle increases.

Yes, there is ground gain and with that an increase in forward gain and so
with noise picked up by first and maybe second side lobes are possible but this will vary with
elevation angle. To the subjective operator this might occur as swelling
up and down of any background noise, especially when a major noise source on the ground is located
in the beam direction. But this is NOT an issue of a certain design but comes
with whatever directive antennas that produce a first side lobe is facing. And
any noise swelling up and down picked up by first side lobe enhanced by ground
gain at lower elevation angles will still be less than at zero elevation.

It is virtually impossible to have higher noise with an elevated Yagi-Uda
unless beaming at an object as a near by sky scraper full of plasma TVs.

Here is a photo and comments from a builder of one of my HF Yagis. Be sure to search 'G0KSC Antennas' on facebook, most of my updates are placed there now!

Attached the OWA15M 6el photos built from my friend Vigand - PY5QW and help from me and our friends.

Excuse me the archive size, to preserve minimal quality I make a little compression.

This is an fantastic project, now the "PY5QW HF Radio Station Farm" have decent antennas to 20/15/10 Meters

band with a expressive quality. I (PY5AB) make 2100 contacts in the last CQWW, some reports are (in debut day): 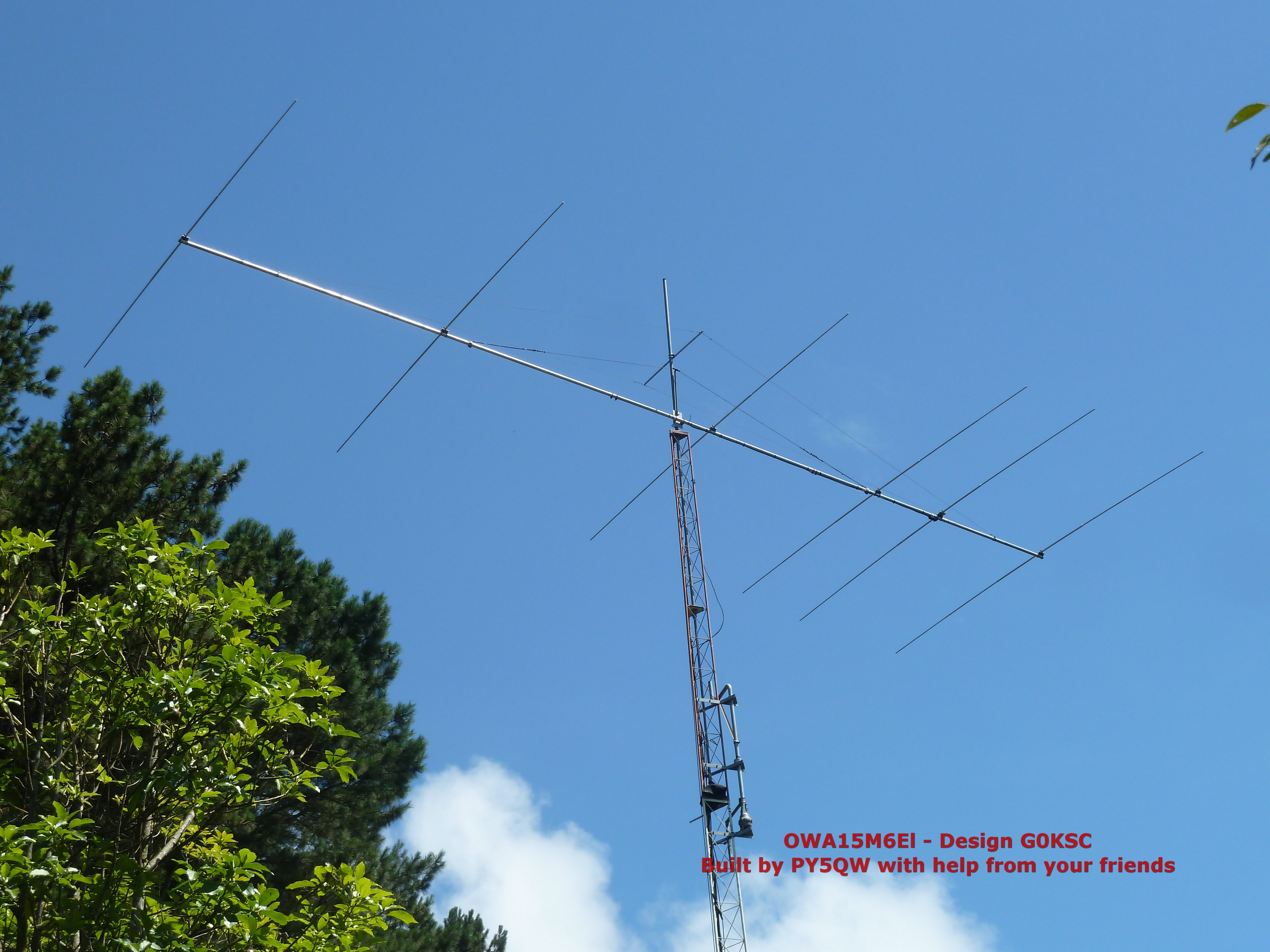